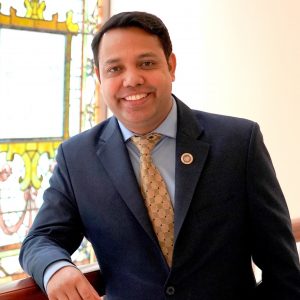 Delegate Bhandari will address the global virtual event “Shaping a Humane World: Global Higher Education Perspectives,” hosted by the STAR Scholars Network as the closing and award ceremony of the 2020 STAR conference. The event will be streamed live via the STAR Scholar Network’s YouTube Channel and Facebook page on December 8, 2020 at 7.00 pm – 10.00 pm (EST US & Canada).

Harry Bhandari has lived the American Dream. Born in rural Nepal, his first job was as an English teacher, school textbook author, principal and lecturer in Nepal’s capital, Kathmandu. Twelve years ago, he was invited to present a scholarly paper at George Mason University, Fairfax Virginia; his American journey started upon receiving his U.S. Citizenship. He attended Johns Hopkins University to continue his higher education and now teaches in the Baltimore City schools as well as served as adjunct faculty at Baltimore City Community College. Harry also served as national secretary of Young Democrats of America (YDA) Minority Caucus and board of director in district six democratic and civic association club. He also volunteered as president of Linover Community Association. He was appointed by Councilwoman Cathy Bevins to serve as a member of the Baltimore County Pedestrian and Bicycle Advisory Committee (PBAC), and is a advocate for more bike lanes across the Baltimore. Harry is the recipient of 2017 Baltimore County Asian American Award. In 2016 presidential election, he founded an organization Nepali for Hillary and actively mobilized the volunteers in more than dozen states in the U.S.. Currently, he is pursuing his Ph.D. at Language, Literary, and Culture at the University of Maryland, Baltimore County. He believes that the full potential of our country lies in diversity. He and his wife have two children and reside in Baltimore County.